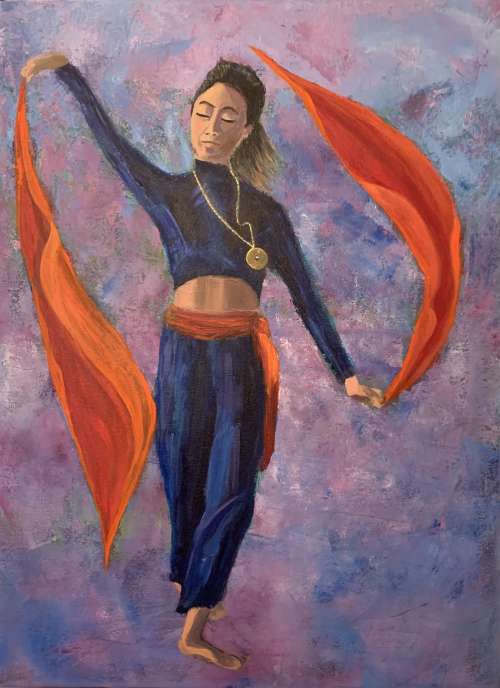 They say a picture is worth a thousand words.

This spring SSAC has ushered in a new collaborative exhibit between our Visual Artists and Writers. Compelling and evocative images inspired stories and poetry of joy and sorrow, fear and longing.

Both the images and the accompanying writing will be shared in store, online, and featured here in our blog throughout the next seven weeks.

Kylie's eyes brimmed with tears of happiness as the Olympic gold medal was placed around Sonja's neck. She loved the young girl like a daughter.

While sitting in the stadium awaiting the ceremonies to commence, Kylie reflected on the events of the past four years that culminated in this day being the most memorable of her life.

Her first encounter with Sonja had been on a flight departing the young girl's war-torn homeland. Kylie had participated in numerous rescue operations but never had she observed a child in such distress.
During the long flight, she had spent as much time as possible with the girl, whom she now knew as Sonja, and who was a mere twelve years old. Kylie's heart broke as the child related the horrors of the war through intermittent tears. The constant fear for their daughter's safety had led to her parent's agonizing decision to send Sonja to live with an aunt in Montreal.

Kiley eventually, guided the conversation to more positive memories of life before the war, and in so doing, learned that Sonja was an accomplished gymnast. A hint of a smile had flickered across her sad face as she spoke of her dream of one day competing in the Olympics.
By the time they reached their destination they had established a special kinship with each other and Kylie assured Sonja that she would stay in touch, as she too lived in Montreal.

Almost immediately, Kylie began searching for the most qualified gymnastic coach in the city. She found what she was looking for in a young woman who was twice an Olympic gymnastic coach. Sonja's audition had so impressed the woman that Sonja had been enrolled for training immediately.

The rest is history thought Kylie as her attention returned to the present.

The previous three days had been a whirlwind of excitement and activity for Sonja but Kylie knew that mixed emotions were being suppressed. Sonja had confided to her that she sometimes felt that she was betraying her country by representing Canada at the Olympics.
Kylie had hugged her young friend, who was now sixteen, and assured her that the people of her homeland would understand that the circumstances of war had closed one door but had opened another for her.

Thank you for reading! We hope you enjoyed this instalment of 1000 Works. Please stop by our store to enjoy the art in person if you have a chance.

Like what you see? Want to take it home? Purchase this Painting HERE