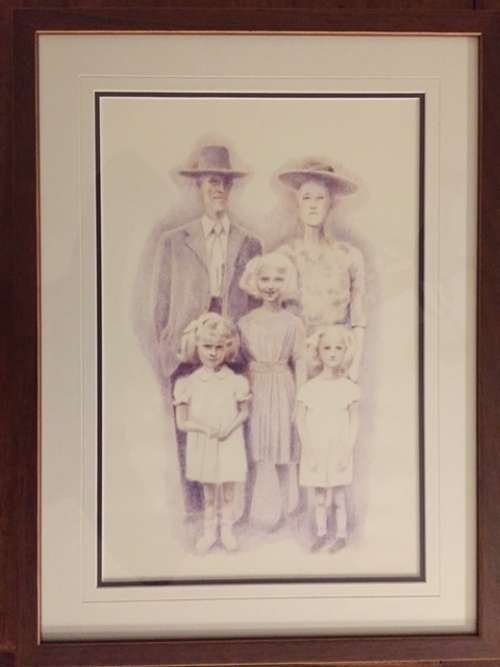 The Smiling One Created By: Debbie Darling

They say a picture is worth a thousand words.

This spring SSAC has ushered in a new collaborative exhibit between our Visual Artists and Writers. Compelling and evocative images inspired stories and poetry of joy and sorrow, fear and longing.

Both the images and the accompanying writing will be shared in store, online, and featured here in our blog throughout the next seven weeks.

The Smiling One
by Brenda Short

The Coulson family had planned a day outing for their annual family photograph. This was something Jack had done every year since his marriage. He was abandoned as a baby and never knew a family life, until he met, fell in love with and married Harriette, or Hattie as he called her, so this family was his whole world.

"How much longer are you girls going to be," Jack called out, waiting happily in the car.

"All done," Hattie called back, assembling the girls for a final check.

Jack and Hattie had two daughters, Betsy-Mae, who had just turned six and who was a very outspoken child with a love of books and reading. Sarah-Jane was the four-year-old who had an imaginary friend, Sue-Ellen. Her parents indulged her, assuming that she would grow out of it.

Today was to be a special day for the family, but the girls only looked forward to the drive-in movie and the burger and fries afterwards. All they had to do was look at the camera without smiling and stand still until the photographer signalled okay.

When the photograph was finally delivered to the Coulson home, Hattie wasted no time in calling her husband. He was perplexed, as they looked at the photograph together.

There was another child in the centre of the photograph, smiling for the camera. How could this be…and who was this child?

The photographer couldn't explain, but when the girls saw the portrait on the table, Sarah-Jane laughed.

"That's my friend, Sue-Ellen," she said innocently, pointing at the stranger.

As Jack discovered, a nine-year-old girl named Sue-Ellen had died there in a cholera epidemic and it was believed that she haunted the house, but she only appeared to children and was harmless.

Thank you for reading! We hope you enjoyed this instalment of 1000 Works. Please stop by our store to enjoy the art in person if you have a chance.

Like what you see? Want to take it home? Purchase this Painting HERE