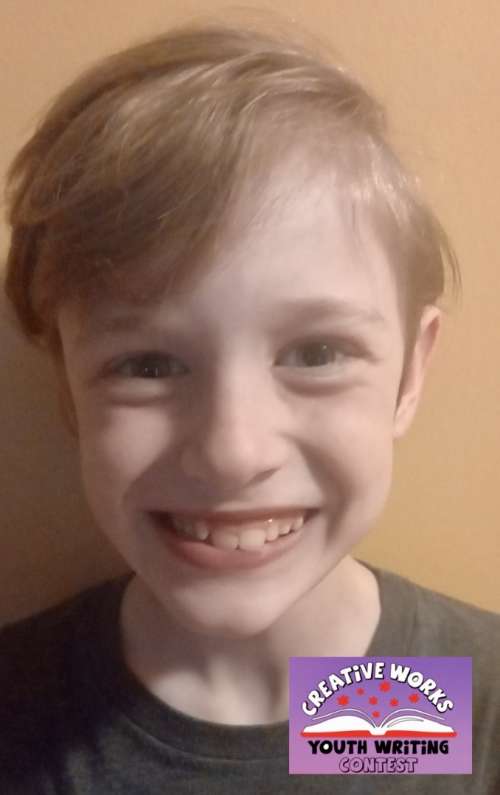 The South Simcoe Arts Council has been shining a spotlight on up and coming writers of all ages, in all genres through its Creative Works Writing Contest for six years.

We are excited to share the winners writings with you over the next few months.

Andrew says, "I have always loved writing. My mom told me about this contest and it sounded really fun. I immediately answered yes and got started writing. I'm not sure where the idea came from for the story but I loved writing it and since, have wrote many more!"

This award is sponsored by Premier Contractors Ltd

Once upon a time, there was a baby that was really terrified of books. When he was three he knew karate and was smart enough to take care of himself, so he left the house. At the age of 8 he was 15 inches. One cold dark night, when he found a black ninja suit laying on the ground that he put on, he saw robbers robbing the bank so he hugged one of the robbers legs, making him fall on the other robber, making him fall. Then he tied them up with a rope. He was looking for more crime when his parents appeared. "Aw, Let's take you to school," his mom said. So they took him to school. He woke up, still sitting at his desk. "Class, the first lesson is science. I'll give you different things to work with and you make something out of it. Ok," said the teacher.

So the boy mixed marker led and a potion together. BOOM!!! The bottle for the potion shattered. There was a huge mess. The next morning he went to school but no one other than MUTANT FURNITURE AND SCHOOL SUPPLIES!!!!! They must have mutated from the potion! He drop-kicked all the wooden stuff hard against the wall, making them smash into shreds. He ripped off the broom's sweepers. Then a pencil case started shooting pencil-missiles out of his mouth (which was his front pocket) at him but he caught the mistols and threw them back at all the pencil cases, then there were a bunch of books, filling the school entrance!!!! He was scared. He's normally never scared but when he is he writes down his thoughts, so he used a mutant pencil and wrote: attacked by book monsters!! on the book's pages and then the book got scared and he figured out that whatever he wrote on the book that's what the book felt. So he wrote: what if the things that aren't books are trying to attack me. Let's stop them!

Then the books started to chop up all the other things. Then when he was about to write: I'm feeling good and happy that I defeated mutant school stuff. The book had already felt good and happy. The boy put a surprised look on his face. "Hey, you were good at fighting them too. So, do you want to team," said the book. He nodded his head. Then the book and him fought crime together. But the best thing was: he conquered his fear of books. And he became a true ninja, he became Mini Ninja.

Thank you for reading. Stay tuned for more short stories and poems from our winners

Filed under: Creative Works, Up & Coming: Youth in the Arts
Share