Sometimes, all it takes is a little recognition to encourage a passion.

I remember the pride in my Dad’s voice as he shared my grade school writing assignment with my grandfather. It entailed twelve thank you notes corresponding with the gifts given in the song “The 12 Days of Christmas”. My first letter was a sincere thank you for the gold ring. My written appreciation became more tongue-in-cheek as the gifts of noisy birds, mooing cows and lords a leaping continued, as did my enthusiasm for “my true love”.

In high school, I was a regular contributor to the “Youth Beat” page of the Kingston newspaper, and wrote teenage angst poetry. I planned on pursuing journalism in University.

And then life “happened”, and I ended up a CGA…. from writer to accountant…..quite a career change!

I never gave up the dream, nor the practise of writing – from short stories to business procedural manuals. I have even had two poems, and two business articles appear in two different national magazines.

In 2017 I entered the Creative Writing Contest at SSAC, and won both first and second prize in the Adult Short Story category. Encouraged by the awards, I decided to develop both stories into plays.

My second play, “The 12 Days of Christmas” will be part of the 2019 Festival at SST on May 30. It is a fictional story, but mirrors real life for those living with Alzheimer’s disease and their families. The play follows Emily and her family, and attempts to capture the hope and the heartache, the truth and the terror, and even some of the humour.

It was only when I sat down to write this article, did I realize how “The 12 Days of Christmas” began, and then renewed, my interest in writing…. life coming full circle.

I would like to see “The 12 Days of Christmas” staged as a fundraiser for Alzheimer’s, or one of the care facilities in the area, and hope that its presentation at South Simcoe Theatre will move that dream into reality.

The play talks about the school Emily attended and taught at. The school was demolished and the nursing home where she lives was built.

The story/play is about Emily's memory of a Christmas concert when she was a child. And I believe the teacher in the picture, Mrs. Hudson may have been the teacher who gave me the writing assignment. I am the girl in the middle of the second row -- one of the five students in grade 3 that year. The school closed down in the spring of 1966 and then we were bused to Selby to the "big school". picture taken just before the school closed in the spring of 1966 taken with my Brownie Fiesta camera

Filed under: Musings of a Member
Share 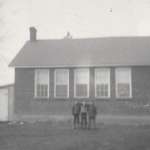 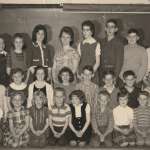