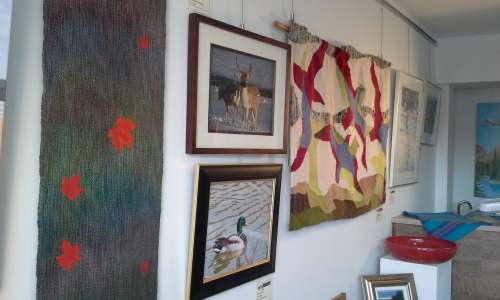 The South Simcoe Arts Council is thrilled to have adjudicators, Scott Sawtell and Dionne Simpson at 41 Victoria St. E. this week for the Ontario 150 Arts on Main Exhibition.

Scott Sawtell has an M.F.A from the University of Waterloo and is a graduate of the Ontario College of Art and Design. As well as maintaining a vital artistic career showing work across Canada and the United States, Scott has previously curated exhibitions for The Town of Newmarket, the City of Kitchener, Oakville Galleries and Humber College.
Scott is an art instructor at Georgian College in Barrie, Ontario, and Brock University in St. Catharines, Ontario. He previously taught at OCAD University in Toronto, Ontario.
Scott works and lives in Newmarket, Ontario.

Dionne Simpson is a Toronto-based artist who studied fine art in New York City at the Cooper Union School for the Advancement of Art and Science and graduated from the Ontario College of Art and Design in 2000. Her paintings are a part of numerous public, corporate and private collections and she is the recipient of many grants and awards. Dionne has the distinction of being the first national winner of the RBC Canadian Painting Competition in 2004.

Award winners of the Ontario 150 Arts on Main will be announced on Friday, June 9th, 2017.

Ballots for the People's Choice Award will be accepted at 41 Victoria St. E. until June 28th and the winner will be announced on Canada Day July 1st.