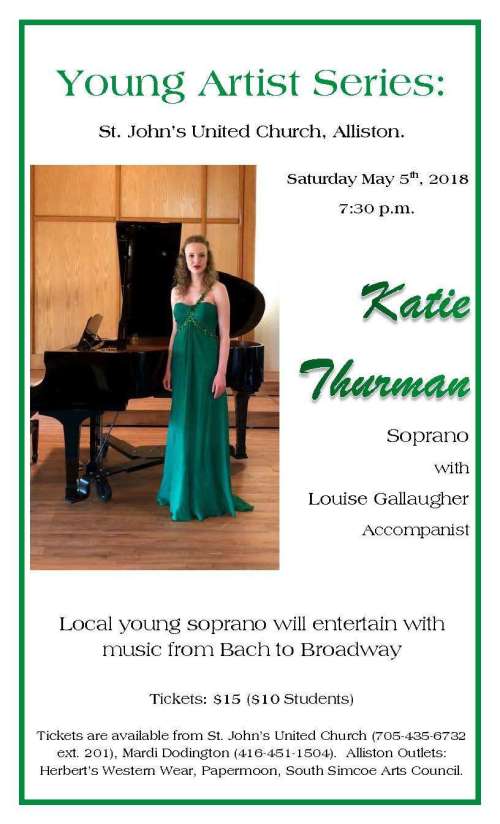 The St. John's United Young Artist Series is pleased to present Katie Thurman, Soprano, with Louise Gallaugher, Accompanist.
Katie will entertain with music from Bach to Broadway at this concert event.

Tickets are available at the following locations:

St. John's Church in Alliston is hosting the final concert for this season in their highly successful music series. This concert features the multi talented soprano Katie Thurman. Katie grew up on a small farm just outside of Everett. At the age of six she started taking piano lessons with her mother Louise Gallaugher, who is an accomplished pianist, music director at Knox Presbyterian and accompanist for The New Tecumseth Singers. Katie received her grade six diploma from the Royal Conservatory of Music in piano, and it was clear that music was becoming a huge part of her life. She was always singing around the house and wrote hundreds of songs throughout her years growing up. While attending Banting High School Katie was involved in many musical and theatrical performances. Katie started taking singing lessons with Suu Taylor who is a local voice teacher. She received her grade 8 diploma from the Royal Conservatory of Music in Voice, achieving First Class Honours with Distinction. She was also a finalist at the Ontario Provincial Music Festival in 2012. Katie has continued taking voice at York University and has studied with one of Canada's finest mezzos Catherine Robbin and briefly with the English soprano Norma Burrowes.

While at school Katie has sung with the York University Concert Choir and Chamber Choir. A huge musical influence for Katie these past five years while at York, has been singing soprano with the very successful WIBI A Cappella collegiate group where she is the Executive Coordinator. WIBI is the longest running collegiate a cappella group in Canada celebrating their 30th anniversary this year. They recently competed at the ICCA, the a cappella competition known from the Pitch Perfect movies.

Katie is an electrifying performer on stage and thrills her audience with her versatility and musicality, performing music from baroque to broadway.

Organizer John Dodington says that Katie's concert is a fitting way to end this year's music series. He advises you not to wait to get your tickets as the last two concerts were sold out events. It would be great to have a full house in support of our very own local singer. You are promised to be entertained from the beginning to the final number which will have you on your feet wanting an encore.