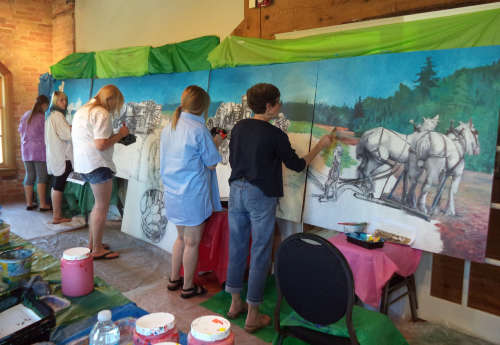 The South Simcoe Arts Council is working with local artists, Greg & Sue Hindle, to produce a community mural based on the theme Our Legacy of Agriculture. We invited local emerging artists and students in grades 7 and up to participate in creating the mural. It was painted on three panels to be installed along a fence on the property of the Alliston Feed Service. The mural will tell the story of our agricultural legacy and celebrate the 20th anniversary of the Alliston Feed Service under its present ownership. It will create a focal point along Albert Street.

Alliston Feed Service has a long history in the community dating back to the early 1870’s when it was established as a grain elevator. As the population grew, grain elevators expanded and became important to business, serving the needs of Alliston’s agricultural community.

The Mural design concept has been developed using actual historical photographs to inspire an appreciation of our agricultural legacy through visual storytelling. The final concept has been scanned, enlarged and divided into grid sections, to be printed and used as reference for painting.
We are excited to work with HONDA of Canada Mfg. and the Alliston Feed Service on this project to offer emerging artists and students the opportunity to add their brushstrokes to the mural. Emerging artists and the students have been guided through the process building technical skills in design, composition, tone and colour mixing.
The Gibson Cultural Centre has contributed space to carry out the mural painting workshops and house the murals while in production.

Wilton’s Floor and Wallcovering Ltd. have contributed the primer, paint and brushes.

September 12, 2015: The mural will be installed on the fence at the Alliston Feed Service and a public unveiling will be held in conjunction with the 20th anniversary celebration. 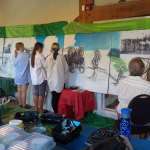