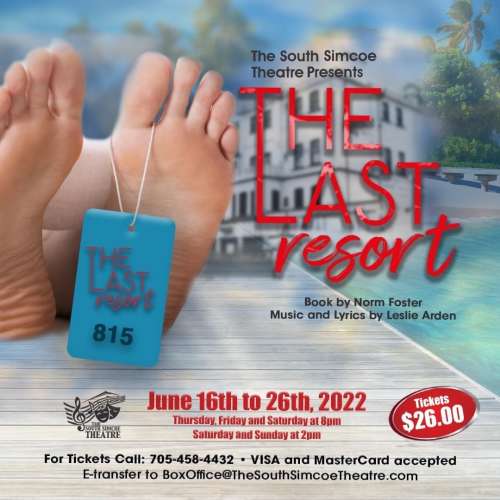 The South Simcoe Theatre is excited to bring Norm Foster and Leslie Arden's hilarious murder mystery musical The Last Resort to the stage. This show will be bleeding out great comedy mixed with musical palpitations and pulsating performances enough to stop, well, someone's pulse. Is that going to happen on stage? We're not saying anything! Come and see our show to find out.

Nick is a big city restaurateur on the run from the mob. Angela, the FBI Agent assigned to protect him from the mob assassin looking for him, brings him to a place where he should be safe from the contract out on his life, a place where he can meld into the surroundings while hiding away – a hotel in rural Saskatchewan.

But is he safe? Perhaps one of the other guests at The Last Resort is not who they appear to be. What are identical twins Julia and Jessica actually doing in this remote place? Why would Sid and Liz pick this place to have a second honeymoon? And the poet Trent, what is his story? Our establishment's owner Freda is a rather interesting puzzle. Will Inspector Closely be able to solve a murder in The Last Resort? Well, you're going to have to come see the show to find out!