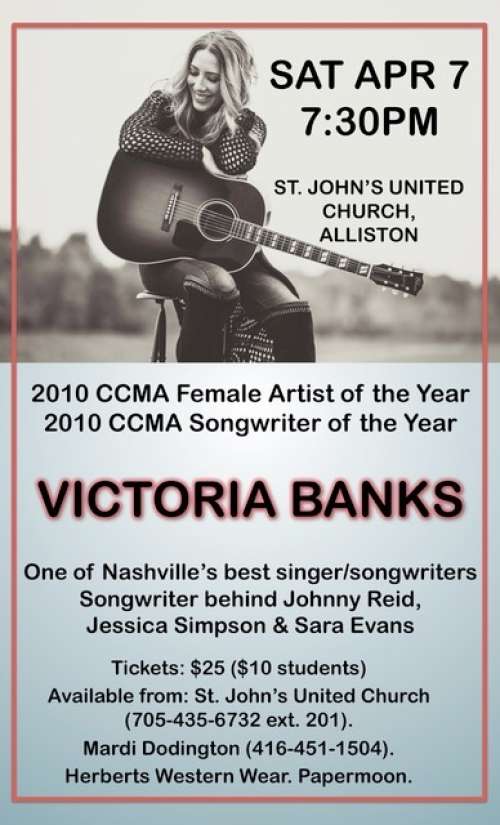 Victoria Banks has been nominated for 11 Canadian Country Music Association (CCMA) Awards and was named CCMA Female Artist of the Year and Songwriter of the Year in 2010. She has been labelled as "one of the best songwriters in the business" by Nashville's Music Row Magazine.

In addition to releasing three albums and touring with artists from Reba McEntire, Randy Travis and Johnny Reid, to Wynonna Judd, Victoria has had an illustrious career as a songwriter. She has penned ASCAP, SOCAN, CCMA, and Covenant-award-winning songs for over 50 artists. Her cuts include Jessica Simpson's Billboard record-breaking single "Come on Over", Sara Evan's hit "Saints and Angels", and duet "Can't Stop Loving You" (with Isaac Slade of the band The Fray), Johnny Reid's CCMA Song of the Year "Dance With Me", One More Girl's CCMA Song of the Year  "When It Ain't Raining", Doc Walkers smash hit "I'm Going to Make You Love Me", and many more.

Concert organizer John Dodington is thrilled to have his niece Victoria Banks accept his invitation to fly up from Nashville to perform live here in his hometown. Victoria was born in Port Carling, Muskoka but has called Nashville home for the past 20 years. Banks was raised listening to the old recordings on her father's antique phonograph collection. Starting at a young age she studied classical piano and voice. Victoria sang with The Cellar Singers in Orillia. She taught herself guitar and fell in love with songwriting. In her teen years she joined a cover band called, "The Bad Moons", with Deric Ruttan, a Bracebridge native who also has a well-established career in Nashville.

Dodington who has seen Victoria perform live many times, says that he can guarantee you that young children and people up to 100 years of age will love her concert. She is more than just a performer who has a beautiful singing voice and happens to play both the guitar and piano exceptionally well, but all of her songs tell a story. Banks has a great rapport with the audience and talks about her life experiences that influenced each of her songs, many of which reflect on her life growing up in Muskoka.