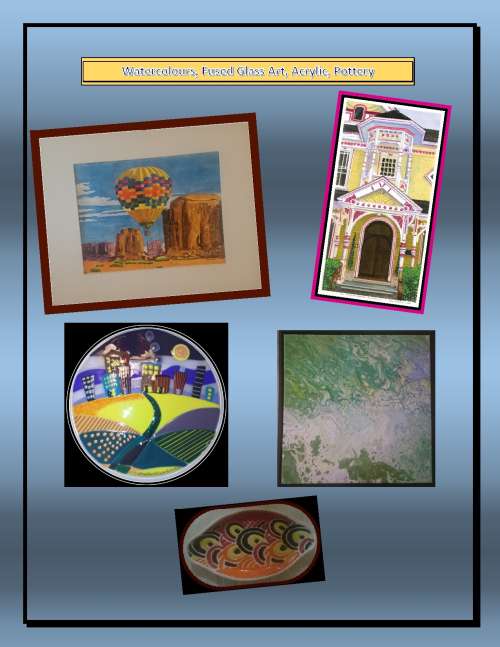 Diane has had a keen lifelong interest in the arts, seizing opportunities both in and out of the classroom during her career as an elementary school teacher. She sang in several choirs and incorporated her love of vocal music into her instruction throughout the years. Diane found opportunities for graphic art expression in the material she prepared for instruction of students, in the actual instruction of Art during a period in her career and in the design of classroom displays. She has had many venues through the years to express herself in writing, whether through academic essays, journal, poetry, tributes, and short stories. As the use of computers became standard, she embraced Microsoft Publisher to enhance her presentations,

Diane's first formal involvement in creating what is readily identified as creative art form was through pottery. A few years and many interruptions later, she resumed and extended her knowledge about slab forming and dabbled in throwing pieces on the wheel, satisfying herself and others with her pieces. Later, she learned the art of stained glass. She enjoyed making glass panels using the foil method and, once introduced to the use of lead, completed several windows using that medium.

Following retirement, Diane attended classes and sketching workshops with several artists in Ontario, while also enjoying a summer plein air session in acrylics at Haliburton School of the Arts. In 2014, Diane began watercolour classes under the instruction of painters who are signature members of the Florida Watercolor Society and the American Watercolor Society. She loves the dynamic use of colour in her work and has enjoyed creating photo-realism in her craft. Since 2017, she has been recognized in juried shows, winning awards for four of her pieces. In 2019, she first exhibited a collective of several of her pieces at the Briar Hill Community Centre. While much of her time is spent painting, during the winters, Diane also shares with learners her knowledge about glass fusion, a skill which she developed as a natural extension to her knowledge of working with glass and with kilns.