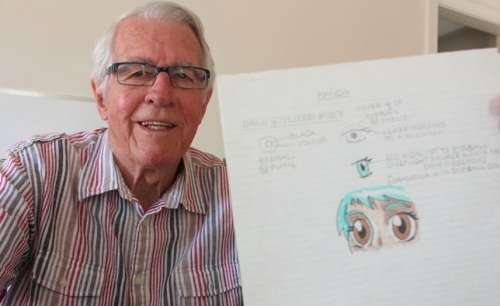 Barrie resident Bob Kain will be hosting classes on how to draw in the manga style, a cartoon or form of illustration that came to prominence in nineteenth century Japan.
However, the style didn’t take hold among North American audiences until late 1970, and has since gained popularity thanks to cartoons such as Sailor Moon and Pokemon.
He’s probably best known for developing the character of ‘Chirp’, the eponymous character in the magazine published by Owlkids. Kain also sold dozens of cartoons to the Toronto Star in 1990, many of them appearing in the financial section as single box drawings with humorous script, though some in the Star’s youth page, Starship.
Kain received his training at the Ontario College of Art, and the School of Visual Arts in New York City.
He’s been teaching cartooning classes in the region, in libraries and community centres, since 1996.
Manga style is characterized by large eyes and a small nose and mouth. Hair is often spiky.
Presented by the South Simcoe Arts Council
Two-hour classes will run over eight weeks, starting on April. 9
Thursday evenings from 4:30 until 6:30 p.m.
held in the Gibson Centre, 63 Tupper Street West, Alliston
Registration contact: Lynda 705-716-6394 lyndamitchell@rogers.com