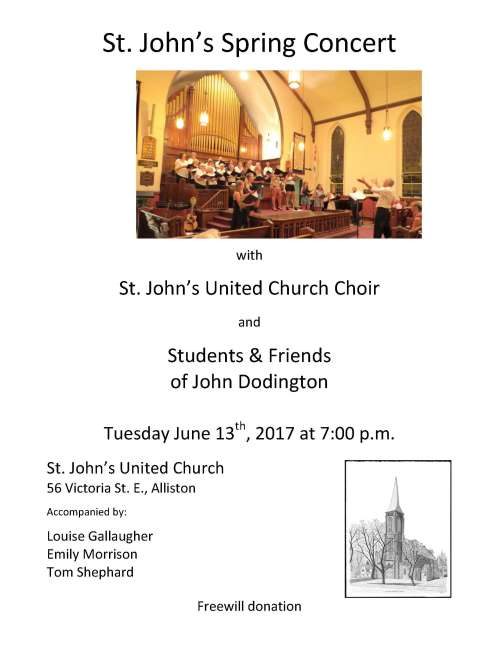 John Dodington's student recital will put a lasting smile on your face.

Mark your calendars now to reserve Tuesday, June 13th at 7 pm for a spectacular
musical event. This is the not to be missed recital of John Dodington's
students and will include the beautiful voices of the "Dodington Youth
Singers," as well as the choir of St. John's United Church. The "Dodington
Youth Singers" have earned a well deserved reputation for how well their
voices blend together. They were a guest choir in the spring concert with
the New Tecumseth Singers performing both in Alliston and Orangeville.

This annual spring concert has a faithful following that increases through
word of mouth every year. Go once and you're hooked! John Dodington
says that his students study hard with weekly lessons and there is nothing more
satisfying than being able to perform to a full house. The concert will
have tribute songs for Canada's 150th birthday and singers throughout the
concert will be accompanied by a variety of instruments including piano,
pipe organ, guitars and a banjo. Some students will be performing their own
compositions.

John Dodington is a professional singer who has called New Tecumseth home
for over 30 years. He has performed in many musicals including seven
years in the Toronto production of Phantom of the Opera. He has also sung
in countless operas throughout North America and Europe.

Come out and support our local talent with their beautiful gift of music,
we promise that there is something for everyone. The concert is being
performed in one of South Simcoe's finest acoustical venues, St. John's United
Church, Alliston (across from Shoppers Drug Mart). Admission is a
free will donation at the door with all proceeds going to the church.