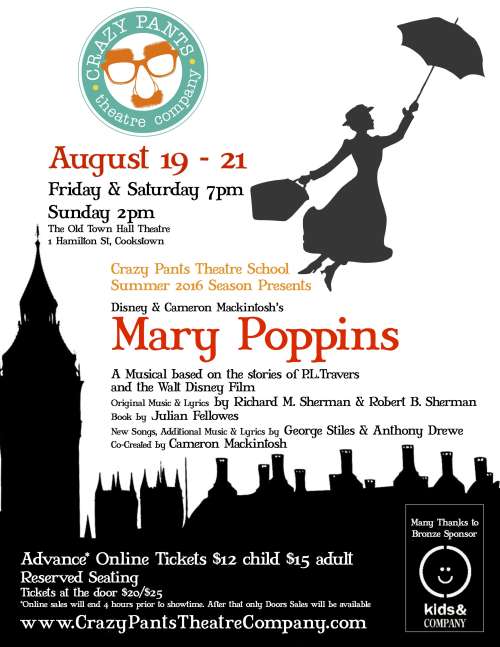 Mary Poppins
A Musical based on the stories of P.L.Travers and the Walt Disney Film Original Music & Lyrics by Richard M. Sherman & Robert B. Sherman Book by Julian Fellowes New Songs, Additional Music & Lyrics by George Stiles & Anthony Drewe Co-Created by Cameron Mackintosh
Starring the actors of CPTC Theatre School
​
They are at it again! This time, the actors of Crazy Pants Theatre School are performing that magical, smash hit, Disney & Cameron MacIntosh's, Mary Poppins. Following the original film, this incredible cast of young actors are stepping into the roles of all of our favourite characters, as well as a few new ones.

The cast of this incredible production has been hard at work bringing this classic to the stage. This version includes your favourites like Supercalifragilisticexpialidocious, Spoonful of Sugar, and Feed the Birds as well as many new songs that are sure to become favourites before the curtain falls.

Make sure to get your tickets before it is too late. Mary Poppins is only in town August 19 - 21 performing at the Old Town Hall Theatre in Cookstown (home to South Simcoe Theatre). Tickets can be purchased online at www.crazypantstheatrecompany.com. Seating is reserved.

Advance Online Sales close 4 hours prior to the start of each performance. After that tickets will only be sold at the door